Pox on this House

If you've only read about my current sickness on here and have not had to suffer my constant Twitter updates a la "MAH BRAIN IS COMING OUT MY NOSE!" and "THE BIGGEST LOSER MAKES ME WARM DOWN THERE!", consider yourselves lucky. Twitter is the devil when you're home sick three days in a row with a laptop adhered to your person.

All of us are at various stages of illness. I've got this creeping crud of unknown origins, The Dude has a variation of it which occasionally renders him unable to do anything but complain about how very ill he is (so, status quo), and P has the ever-constant runny nose and cough with the pleasant addition of a funky, diseased big toe. I took her to the doctor yesterday because I had nightmares of it swelling from infection and the poor mite having to live the rest of her life with elephantitis of the toe. "Magic" cream was prescribed, and upon returning her to nursery her teacher went through a litany of reasons P may have gone to the doctor, none of which included a funky toe. I guess it just goes to show that my child is a walking ball of eleventybillion kinds of lurg.

We all deal with sickness differently. This is my way, with my anonymity maintained thanks to a filthy as hell mirror. Yes, I'm clutching a tissue, talking to my Mom on the phone, and taking a photo. Us women are such multi-taskers, eh? Also, helloooooo titties! 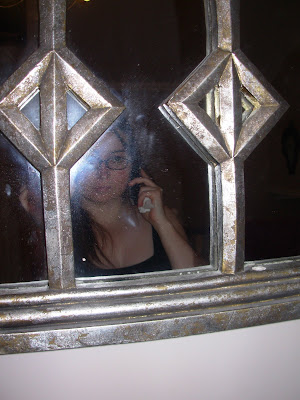 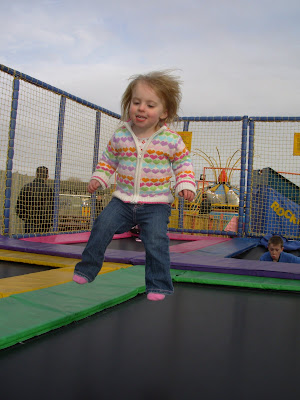 The Dude, bless him, does sound a bit rough, but dude, suck it up. As we were going to bed the other night he said, "Oh no. I feel the shivers coming on." Yawn, but also, HAHAHAHA! He does get the shivers when he has a cold, and let me tell you, it is goddamn hilarious. I should feel pity, but instead I lay in the bed trying not to laugh. The next morning he expressed much relief that the shivers did not materialise this time, as if a biopsy had just come back negative. Dodged a bullet there, phew!

I suppose I should be a sympathetic wife at some stage. The Dude is having his hip replaced next Monday thanks to a bastard inherited degenerative disease and I will be attentive and sympathetic as a good partner would be. This time next Monday his leg will be placed up by his head whilst his hip is replaced - and he will be awake for that lovely demonstration of things-which-should-never-happen-in-a-world. His recuperation period is about two months, so any advice (or good wishes)regarding what will essentially be single parenthood is much appreciated. Let me just remind you, that is single parenthood of a very spirited two year old.

Ever since The Dude's hips started to deteriorate he has struggled with this sort of ailment's association with advanced age. It is hard for a guy in his 30s to have the hips of someone twice his age, particularly as he used to be a very active, sporty person. With that said, by extension I'm a bit sensitive about the matter too, so please, no jokes about age-related issues. It's strange how people wouldn't mock a younger person with rheumatoid arthritis, but yet things like dodgy hips seem to be fair game. I don't imagine most people would be thrilled if they had to have two new hips by the age of 40.

Ok, with the serious stuff out of the way, would you like to see the spoils of his surgery? God bless the NHS, as we get TWO free elevated chairs, a raised toilet seat, and something I can only think to call a grabber. Given the age-related fears he has, a raised toilet seat is not his favourite item. I don't think he was thrilled with me when I left it in the building's lobby with our surname emblazoned on it when it was delivered yesterday. It's heavy, and I'm ill! Cough.

The gang, just chilling by the window on a late winter's day. 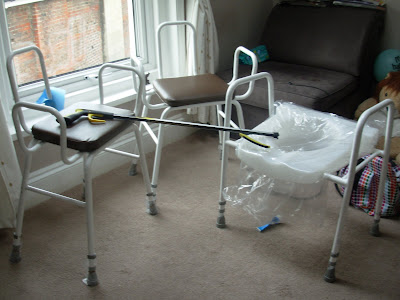 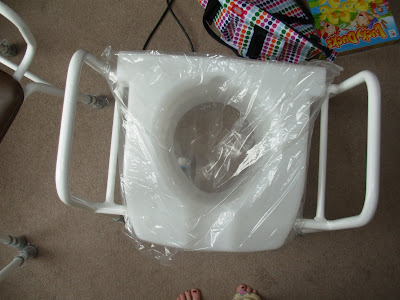 Last night I was frightened by a lone chair sitting in the dark, pondering. I was waiting for a disembodied voice to start shrieking at me, and thought I'd stumbled into an abandoned asylum. 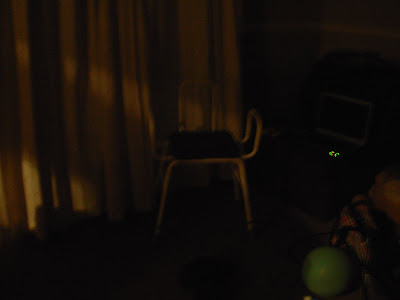 Here is the grabber, utilised to do the housework and to fetch my much-needed tissues. 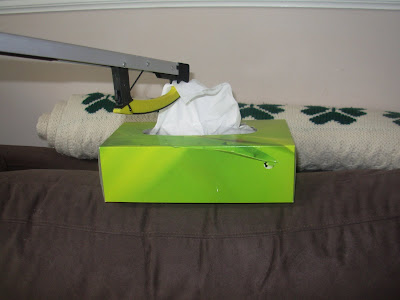 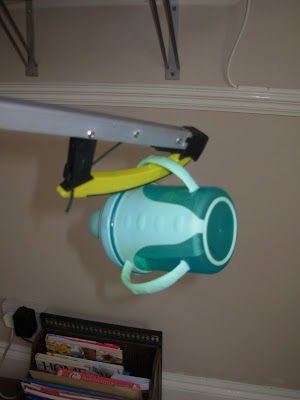 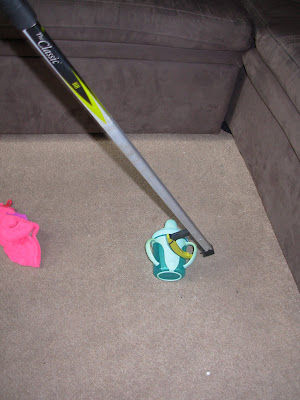 Because no surgery would be complete without a nifty booklet on what to do and not do...

Butt clenching, ahoy! In case you don't know how to clench your "bottom", here are some arrows to show you how. Also, isn't it "glutes"? 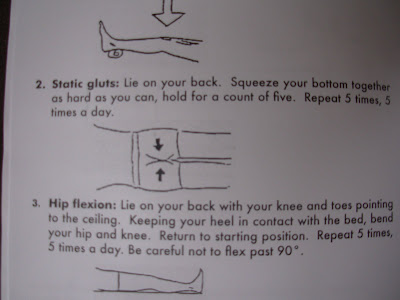 Because you've not been through enough with the hip replacement, they're only going to take it from you in the middle of the night anyway, the bastids. 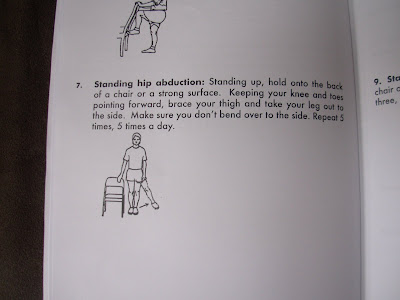 And finally, don't do this after a hip operation. My personal opinion is that if you're doing this at any point, you've got issues. 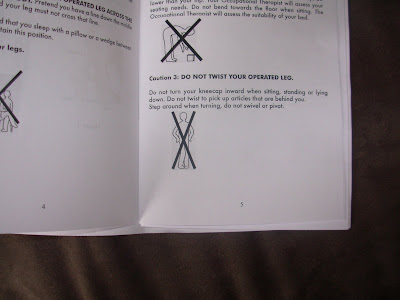 Angus' dad had a hip replacement (this is not an age-related dig, hang on) and found the physical recovery side of things wasn't as bad as he'd expected. I'm hoping The Dude finds similar.

Also my brain blew up with excitement at the image of The Grabber and the things I could do with it. The Grabber would not be leaving my home again.

I think you should have left the commodey-thing downstairs longer. Not everyone may have got a chance to see it!

I thought it was "bum" on your side of the pond? No?

You have seen The Man Cold, yes?

Wish the Dude well. My best friend in high school had both knees replaced by 30 for the same reason (some degenerative bullshit). Sucks. Sucks for you too. Best wishes all around.

All manner of good luck to you and the Dude!

But seriously the grabber is the most fun piece of invalid equipment ever produced. GRAB STUFF! FRIGHTEN CHILDREN! PINCH PEOPLE'S ASSES! Endless fun.

Jeez, I'd almost go ahead and get my hip replaced if it meant I could miss work for 2 months.

I need one of those toilet seats. Just for watching TV.

We acquired one of those grabber things, somehow, and the children LOVE it! As does the Husband. He does use it for butt punches and various body part pinches, as well *sigh* I hope everyone feels better soon and surgery and recovery time goes very smooth.

I'm sorry I just laughed my ass off at your post. I feel sorry for the dude but with so much material lying around he should have a hilarious recovery! And you're gorgeous btw!

Dude. I'm trying to be all sympathetic and then I see that picture of you and I'm all "Helllllloooo, sexy. Whatchu doin'?"

good lawd are you cracking me up today. Hope the Dude has a swift heal!
& please do more of these photo posts!!
xoxo

p.s. you ARE looking all fetching in your smoke & mirrors photo.

Poor Dude. But, the shivers? So hilarious. My husband has a tickle in his throat or sneezes twice and he takes to his bed like a Victorian-era woman with Scarlet Fever. Men.

Your grabber sure is handy to have helped you do the housework all day long. I’m pretty sure that would also be a good help outside your house, like in your garden or lawn. =) My not-too-tall mom actually loves her own grabbing tool because she can pick up almost everything with ease, even those on hard to reach areas at home. She uses it every day, and she has actually grown to be quite deft at picking up things using her grabber.