I was going to write a post comparing the holiday season in the UK to that of the US, but no time, no time! Instead, I leave you with this, the best contemporary Christmas song I can think of. Sorry Britons, through saturation you'll probably disagree!

Fairytale of New York, The Pogues with Kirsty MacColl:

Things that make me laugh

I feel I must support this artist and buy all of his work, because, hello? How funny and creative are they? Well, I think he/she is humorous anyway. Almost apologies to any who are offended.

Guess how much I love you

For the past two years I have hassled you poor souls to join my card exchange, going against my non-participatory personality for the sake of receiving cards in the vain attempt that I will at least, in my head, be awash in popularity. Both years I have cursed this odd desire to orchestrate such an event, which always seems like a good idea at first. However, as soon as I realise it's the second week of December and Christmas is a mere handful of days away, I wonder if I've made a huge mistake.

I spent the middle part of last week trying to catch up on work (who knew so many kids want to go to university?), and writing those damn cards. I'm a firm believer in putting personal messages in cards, so in essence, fucking myself over. I can't just write, "Merry Christmas!" and be done with it. I need to write a paragraph. Or two. At the end of it all my right hand was temporarily in the shape of a claw due to nasty hand cramp, and I vowed never to do this again. No doubt next year I will forget all of it and cheerily invite you all to exchange cards. I will then curse you, as well as myself, and then moan about it on here. I'm good like that.

With about 40 cards in claw, I made my way to the Post Office last Thursday. I went to a different Post Office, as the main one in the city is known for its hour long waits this time of year. They have serious comprehension issues regarding the staff required for lunchtime periods over the holidays. Two windows open for a huge queue at 12.30pm? Makes sense to me!

I'm rambling. At New to Me Post Office, I was greeted by a haggard, toothless old crone who shouted at me to not stand at the service window as one would logically do, but to go to the till next to the Post Office window instead. I did as commanded, and gave the gummy bitch the first of my group of cards. She grabbed the cards out of my hand, paged through the envelopes whilst examining the addresses and said, "Too late, too late, too late", slammed them back onto the counter and pushed them back to me with a self satisfied smirk. I looked at her, waiting for her to take the cards back, or at the very least tell me to put them on the scales so postage could be determined, but she said nothing.

I told her that I was aware that I had missed the last recommended posting day for cards going to the US, but this did not please her. She sighed heavily, and gestured at me to weigh the cards. When the weights were determined, she said, "You can't have any Christmas stamps, or self-adhesive ones for that matter. Since you're so very late posting these there aren't any left. That's what you get for waiting this long to post your Christmas cards." Pardon? Was this woman really lecturing me on my card-writing punctuality? I'm not even trying to hear that shit when The Dude is rabbiting on about it. I even had the courtesy to separate my cards into same-weighted groups and by continent, yet still she was vile, the dentally challenged cretin.

Hoping that the aggression would subside, I got my card out to pay for my massively overdue haul. When the total of £35 was announced (that's $70 American dollars kids, which is just how much I love you, no more), Madame Sans Dents snapped, "That's a lot of money to be spending on Christmas cards." I said it was just a side effect of living 4000 miles away from where your home country, to which she sniffed, "It's perhaps a bit too much money to spend on cards." And with that, my dreadful exchange with the evil old bat was finished.

Anyway, carrying on the so-very-festive nature of this post, I thought I'd post a photo inspired by Cecily's caged tree post. As the mother of a very destructive and inquisitive toddler, we also had to barricade our poor tree. Otherwise, P would eat the tree (fake) and wrapping paper, and likely crack some teeth swinging around and gnawing on the heavier ornaments. We don't have a suitable gate to surround the tree as Cecily does, living in a mousehole-size British flat and all, so we stuck our bedroom blanket box in front of it instead. There is a gap between sofa and blanket box, so we have stacked about 4 cushions in the space. However, P is also a climber and often tears apart our cushion wall in mere seconds. I need a nap from this preventative activity alone. 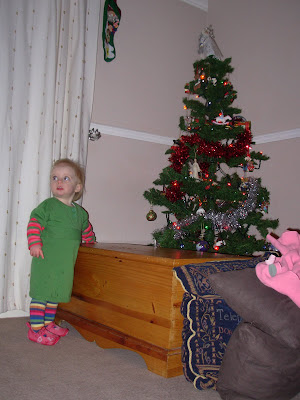 The kid loves this tree. It's the first thing she rushes to see in the morning, and the last thing she says goodnight, or in her case, "ta ta" to before bed. I don't want to think about the tears when it has to come down. 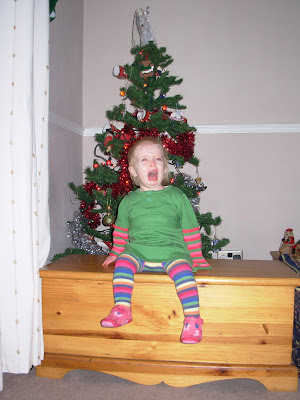 Stupid blanket box! Trying to keep me from my beloved! Hey - you with the brown hair and boobs too big for your frame, stop taking pictures of me! 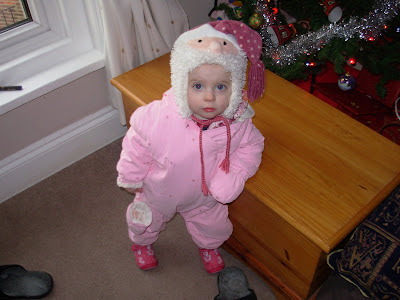 P after making peace, however temporary, with the blanket box. This is her winter casual look.

Carrying on with this why-blog-about-real-topics-let's-call-the-whole-thing-off theme I've got going here, I have a favour to ask. The Dude and I LOVE The Wire. We want to have sex with it. I want to bear its petri dish children. Unfortunately, it is not one of the TV shows like 24, Prison Break, and Lost that the UK thinks is important enough to air close to the US air dates. This breaks our tiny little Anglo-American hearts.

January 6 marks the premiere on HBO, and The Dude and I cannot bear the thought of waiting the better part of a year before the show airs here. This is where you kind souls come in - would anyone be so nice as to record the episodes on DVD as they air and send us the episodes when the series finishes in the US? You will be handsomely rewarded in a manner which has not yet occurred to me. I'll buy you a necklace on Etsy (which, by the way ROCKS almost as much as geology), I'll send you an Amazon gift card, I'll pay for your IVF. Uh, ok, perhaps not the last one, but I'll hook you up with something.

I have many ideas on posts floating around in my tiny little pea head, but no time nor inclination to write them at the moment. Work is out of control busy, P is sprouting what better be all her fucking molars simultaneously, I've had a cold for weeks, and a 24 hour day is about 24 hours too short. I don't have a sense of self at the moment, and each day is a blur of fuzzy headedness.

With that said, I'm going to take up Oro's challenge, even if it is lazy blogging. Oro sayeth:

"Out yourself! What musician/genre/song do you love, but would never ever ever enjoy outside the privacy of your home/car/mp3 player for fear of being ridiculed by friends and loved ones? Furthermore, I dare you to go to YouTube and either embed said songs onto your blog or provide links - c'mon, you know you want to share...if you're totally chicken, I suppose a link to Amazon or WikiPedia would be acceptible. I'd love to be able to go to sites where I could hear the music."

As you hopefully know by now, I looooove music. I need to listen to lots of music every day, and I trawl music blogs looking for new stuff all the time. I have very eclectic tastes, and with that variety comes a love of music which some might mock. They can bite me. So, here is just a smattering of some of my music loves that I'm usually not *too* ashamed to confess to adoring.

Styx: Come Sail Away. My fondness for this song started when it was used in a great scene in one of my favourite TV shows ever, Freaks and Geeks. I have mentioned before on this very blog that P and I have Come Sail Away danceathons when we party and get down like a couple of madwomen.

Destiny's Child: Bootylicious. I like Beyonce and Destiny's Child. There, I said it. Though I don't own any albums of either the group or Beyonce solo, I have many an mp3. Sorry Helen, I know you shed a tear or two of frustration every time I declare my Beyonce love.

Girls Aloud: Call the Shots. When it comes to British girl bands, I'm usually a Sugababes kind of girl, as is The Dude who ADORES the Sugababes. His mp3 player is packed with the most pop-oriented, camp music you can imagine. He has at least 2 Erasure songs on there, I'm just saying...

Limp Bizkit: Break Stuff. I'll even go out on a limb and confess that when YouTubing this, I thought to myself that I liked a few of the results in the Limp Bizkit search. Hmph. Thanks to Major Bedhead for for giving me the strength to admit that I too enjoy a little Fred Durst. Anyway, I like some shouty music that isn't too metal-like. When I'm being a serious music lover, I'd say System of a Down filled this requirement, not Limp Bizkit.

The final video is one which I genuinely embarrassed about. Don't tell anyone, please, as my street cred will be completely compromised.

Paris Hilton: Nothing in This World. There's nothing I can say to make this right.