Time flies when you're mentally unstable

Somewhere between maternal instability and reflux P. turned six months old. Friday marked the exact date of this occasion, and I breathed a sigh of relief or ten for keeping a baby alive for this long. Only another 17 years and 6 months until I am home free and she is responsible for keeping her heart beating herself.

I'm surprised these six months have gone by so quickly considering the first three months of her life were most certainly the worst of my life. I do wonder sometimes if she will one day read all I've written since her birth and wonder if I ever really wanted her for those first few months. In retrospect, things are better, just as many of you predicted they would be. Nonetheless, I wouldn't want to repeat those months for anything, and had the misery continued I would have cursed Patrick Steptoe and Robert Edwards to an eternity of self-administration of hormone-filled needles to the testicles. Louise Brown would suffer solely through guilt by association for being the first product of a procedure that brought little hell beasts to desperate women who thought they wanted a child until they actually had one.

Ahem. Luckily, the anti-reflux medication has allowed my true child to emerge, and she is wonderful. The only time she cries is when I leave her on her playmat too long, which is generally the time I'm trying to watch Roseanne repeats that I've seen hundreds of times. Though I've not had her weighed in a few weeks, I suspect she is 15 - 15 1/2 pounds, which is about 10 pounds more than her birth weight. She's a complete glutton who has taken to every single food I have introduced to her during the weaning process, with a particular fondness for carrot and apple puree. Yum.

Speaking of purees, I am making them myself and freezing them. I'm sure the words "big fucking deal" are on the lips of many of you, but this is a huge accomplishment for me. I am in no way domestically gifted, so for me to go into a kitchen, prepare a food and freeze it for FUTURE USE...well, it's a shocking turn of events, let me tell you. I am Little Miss Suzy Homemaker up in here. Some days I even multi-task, doing dishes, laundry, general cleaning up, as well as standard baby duties. Don't worry gentle readers, even though I may start sporting a beehive and a starched, ironed apron, I'll still be listening to Jay - Z whilst pureeing my little heart out. As he says in the seminal work, Dirt Off Your Shoulders, "Ladies is pimps too, so go and brush your shoulders off". Naturally, as far as my life is concerned this is only superceded by the line, "Green for the money, yellow for the honeys", from 50 Cent's masterpiece P-I-M-P, which, duh, is totally the story of my life. Pardon me for the rap lyric diversion, I get carried away sometimes reminding myself that you can retain non mom-ish aspects of your personality after you pop one out.

So yeah...back to the kid. I do feel rather silly for gushing about P. turning 6 months, given that it's such a minor milestone. It's like when you have kindergarten graduation - what's the point in all the celebration? Was anyone ever in doubt that you couldn't handle the rigours of kindergarten and burn out before first grade? I don't imagine there were many that thought P. wouldn't make it to this point, aside from myself. Those dodgy days spent under the duvet, shaking uncontrollably and crying to the point of almost vomiting...those were the times it all seemed rather tenuous.

I have read so many blogging ruminations on the wonder of children reaching certain stages. Many are beautifully written, filled with amazement that this amazing creature is thriving and growing so quickly. Me, I just quote rappers. The difference between myself and those other bloggers is vast. I don't often feel capable of writing flowery prose about the glory of my child. I feel as if it makes me seem emotionally detached, since I can only seem to put the negative aspects of my experience into words. However, when I look at her and actually think that I have a daughter, that I am her mother, I don't know if words can ever do justice to the emotions I feel. Well, no words I possess anyway.

I don't do this very often, but here is some gratuitious baby eye candy. Here's to making it another 6 months, and hopefully many more, kid. 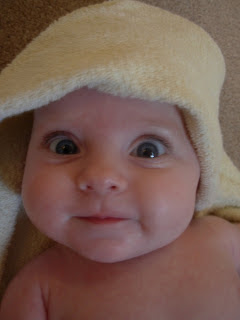 Merry war, Christmas is over

After nearly a month of no posts, it will be miraculous if there are still readers hanging on to this dear old blog. Add to that the fact that my last post went down like a lead balloon loaded to the gills with lead and a basketful of cheesy, bad-spelling women who say things like "ttc", "babydance", "aunt flo", dumping babydust on unsuspecting infertiles below. Jesus, you try to maintain your cynicism after you pop a baby out of your vagina and this is what you get...

The bulk of my holiday was spent trying not to roll my eyes at my alleged well-meaning mother, but what would Christmas be without family-related drama? I am relieved that I can now live each day without hearing little nuggets of wisdom regarding P.'s development and her desperate need to have more tummy time. Christ on a bike, the number of times I had to weather comments like, "Make a wedge! Put her on her stomach or else she'll never be able to lift her head up! She'll need to have her head propped up on a stick mounted on her motorised wheelchair if you don't give her tummy time because she'll never have strong neck, arm and leg muscles!" Ok, perhaps I am paraphrasing a bit, but it's not too far off from what was actually said. At least 4 times a day. For 2 1/2 weeks.

I'm sure some of you will read this post just to find out if my flat ass was highlighted. Rest assured, dear readers, my mother did not disappoint. I was making P.'s lunch one day and my Mom, never one to ignore a flat ass, said, "You know, you have no butt at all." Sigh. She either has no recollection of her regular ass dissing, or she really wants to drive the point home so me and my flat ass look into implants, thus making her proud of me and my new ass once and for all.

Since telling funny stories of my Mom never gets old, I'll recount one from the night before she left. It almost made her tummy time and flat ass obsession worth it. The Dude was watching UFC, and the audience was panned to reveal Kid Rock. My Mom looked up from her ebaying of antiques and said in a I-think-I'm-so-sassy-and-up-with-the-street-lingo way, "He don't impress me much" and pursed her lips/grimaced in an "oh no girlfriend" kind of way, then went back to her ebaying. I was waiting for the accompanying finger snaps and head waving, perhaps with a talk to the hand motion, but alas, it was not to be. Through his attempt to suppress his laughter, The Dude said, "He's got the moves, but has he got the touch?", but my Mom didn't get it. Her response? "I don't care, he still don't impress me much." This woman is the origin of half of my genetics. Worry for me. Worry for P.

In other holiday-related news, the card exchange was an apparent success. Thanks again to everyone who participated. I hope you received many fabulous cards from fabulous places. I'm going to start working out now for next year's exchange. Rather than (flat) ass shots, I'm thinking along the lines of a tasteful nude.

Believe it or not, I have quite a few new posts brewing. Inspiration? Surely not! I'm planning on going back to my roots, discussing some IVF and PCOS issues (though not necessarily together) which will hopefully encourage those amongst you with no interest in baby-related bogging to emerge. Speaking of emerging, it's De-Lurking Week or whatever, I agree with DD in that it is a "blatant and self-effacing attempt to get one to comment", but I'll be a whore anyway. Specifically, if you are a lurker with a blog, let me know. I only have, like, 86 feeds on my Bloglines and I obviously need more. Hell, even if you lurk and don't have a blog, tell me about some blogs you like! It's like mutual comment masturbation. I get more comments, you get more traffic to your blog. That way we both leave satisfied. Ooo la la.
Posted by MsPrufrock at 1/10/2007 11:04:00 AM 26 comments: