I liked you more when you were barren

I have spent much of my valuable blogging time complaining about my body's fierce and determined hatred for me. PCOS and its four years of resulting infertility, an aversion to the drug which eases some symptoms of PCOS (Metformin), and the final icing on the eff-you-Pru cake - inability to breastfeed. Guess what? My body and I are total BFFs now. No, really. It's cooperating.

"How?!", you ask, tripping over yourselves. Patience dear children, patience.

I haven't had normal, timely periods ever. They were irregular from when I had my first at 13, and I would often go half a year without bleeding once. When I went on the pill at 18, they were finally predictable, but would stop as soon as I stopped taking the pills. I just assumed that I was doomed to a life of irregularity, but...but...

I now have a regular menstrual cycle without the aid of birth control pills. REGULAR. As in, my uterine lining is shed once a month on a REGULAR basis. Sloughing people, sloughing. It's like fucking clockwork, and I looooove it. Yes, I love my period. I'm almost moved enough to refer to it as "Aunt Flo", just so I can cheerily proclaim, "Sorry, I'm unable to swim at the moment, Aunt Flo is in town" ::wink wink:: Oh, how I've always wanted to live this life, the life of the regular bleeder...

Attentive readers may recall that I had no period post-baby until one was thrust upon me courtesy of birth control pills, and it lasted for one whole month. Ah yes...fun times indeed. That was my penance for not having a period in fifteen months, and I think I was a faithful and willing servant. I let my ladybits do their thing, and other than the occasional near-fainting spell during which I had to secure the baby lest I crush her or expire, leaving her with only my rotting carcass for sustinence, I issued nary a complaint.

I'm letting myself think that perhaps, just perhaps, this regularity might mean that my innards are not as dysfunctional as they used to be. I suspect my hopes will come crashing to the ground if I decide to attempt getting pregnant again, but it's fun to be optimistic if only for a little while.

This glimpse at physical normality has lead me to think more about natural pregnancy. You know, the kind that doesn't involve this: 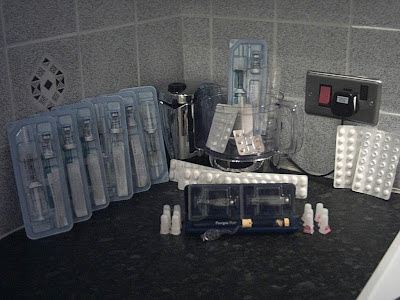 That's my Baby Lab. I cooked up a P. using all that shit.

I was reading about a non-infertile blogger's recent pregnancy, her second. I was jealous of course, even though I can't say I fancy a pregnancy of my own at the moment. Her level of ease won't come naturally for me, I'm almost sure, even with this recent physiological perfection that I'm experiencing. I think I'll always be jealous, but most noticable in its absence was the pang of bitterness I so often felt before. Before, pre-P.

I guess it seems logical that my bitterness would wane somewhat, now that I have the prize, which, by the way, shit in my bathtub tonight. I just never thought I would reach that point, but I'm glad I have. Even though it's my nature to be bitter and cynical on so many matters, I always felt horrid for begrudging women their pregnancies. I think back to posts where I complained about others' fertility, and I think how I must have seemed like such a hypersensitive, callous bitch.

I can't say unequivocally that I'm over this. I would love to be, but I suspect it would only take a few negative cycles until I would be back into crone mode. It's almost an unfathomable feeling for me - not getting prickly about someone's pregnancy. Can you imagine such a world?

Funny. Having had a "normal" pregnancy myself, I am horribly bitter and callous about anything related to pregnancy with few exceptions. If the secret is something that can be put into words, put them in an email to me. I'm in sore need of them, especially now.

I am SO impressed by your body's newfound ability to slough. That is just fantastic. Coming from another irregular slougher.

I can't quite imagine your world - I'm not exactly back in crone mode like I was before, but I do still feel pangs when I see pregnant bellies. I don't know if it will ever go away.

Wait...so it just starts on its own? Every month? I don't believe you.

As for the pregnancy jealousy, it is all so bizarre. I currently AM pregnant, and yet am feeling more hostile towards fertile pregnants than ever. Go figure.

That is the second shit-in-bathtub story I have heard this week. I live in fear of this phenomenon visiting my life.

I wrote about this a few weeks ago--I don't have that bitterness anymore, but I do still get jealous when I see pregnant women, not because they got pregnant, but because they get to be out and about while pregnant, all cute and round-bellied and glowing, instead of marinating in loneliness on their couches for four months. (And Alexa--I too was jealous of pregnant women WHILE PREGNANT. The soul of an infertile woman is a mysterious thing.)

I am also jealous of your regular periods. I've been bleeding every two weeks--and I'm on the pill, for pete's sake.

Yeah, I'm with you on the jealousy bit. I became jealous of the knocked up set starting when Isabella was about 6 months old. And this regular period you speak of-I've not ever had it either, and still don't. I just finished breastfeeding, and supposedly it's supposed to return on its own. I have my doubts.

My gynaecologist thinks that pregnancy can sometimes 'reset' a PCOS-er's hormone cycle. Are you telling she wasn't only saying this to torment me?

Mind you, after the month-long-bleeding, you've so earnt a nice bit of normal.

From another who has never, ever, ever had a regular period in her life. Except when on the pill, which doesn't count.

I could get used to regular cycles. But once a month is a bit often to my taste, is once every 6 weeks an option?

Though the bitterness at other's natural pregnancies is much less, it hasn't gone yet. But it's early days yet.

Well, butter my bread and call me Betsy! Your uterus decided to up and start working like it should! Am highly impressed, darling. Does this mean you're (*gasp*) OVULATING as well? Hot damn!

And no, it doesn't go away. I'm not even trying now, and when someone announces a pregnancy, I think, "Well, of course. Why wouldn't you and everyone else in the world be pregnant?"

I never had a normal cycle either and had difficulty getting pregnant. I too used to get very upset when it came easy for other women. And like you, I no longer feel that pang thanks to Piper.

I think it is completely natural. Congrats on the regular flow!

As a PCOSer currently pregnant after IVF, you have ignited my hopes for future regularity. I had heard stories about periods becoming regular after a pregnancy, but thought they were urban legends. Now that I hear it is happening to you, I am finally compelled to believe the mythical stories. I am impressed. And does it stay that way? It sounds amazing. One more thing to be jealous of. And about still experiencing pregnancy envy even while pregnant? Check.

PCOS has destroyed many a mattress in my house. I empathize. I didn't have trouble conceiving the two babies I have....but I did end up with a hysterectomy at the ripe old age of 35. I'm very happy for you! I remember rejoicing when Aunt Flo showed up too!

I was callous, bitter AND whiny and I don't feel bad about it at all. Nor should you.

I am also thankful everyday that I don't feel that way anymore. Well, except...

{I remember that drug picture like it was yesterday}

Maybe your internal clockwork got reset? Have you had a power outage recently? Either way, enjoy it!

I think I'm mostly over the bitterness too except i'm currently too sleep deprived to care. Congrats on having Aunt Flo do her thang. She's as regular as clockwork in this house, she's just completely useless.

Yeah, count me in the "regular-periods-are-weird" club too. We are officially TTC now, and I suspect I'll hit crone-mode pretty quickly if it goes slowly. We all have a pretty low tolerance in this particular area.

Wow, that is so cool about you gaining a monthly visitor! My cousin struggles with PCOS, also, and it suuucks.

And yes, I have no remaining logical reason to be jealous or even dislike preggos, but yet I do struggle with that. Although intellectually I'd like to let it all go, some part of me deep down feels like infertility and recurrent m/c was part of what I was meant to go through, so to completely shed that would not be true to my life's experience. I am a different person now. I hope to come to terms with it in time, but I'm not going to beat myself up in the interim.