You may find this hard to believe, but I was never popular in school. My unique fashion sense meant that I was sure to be remembered in some capacity, but I was certainly not going to be recalled fondly by ex-classmates as a person with a magnetic personality that hordes of high school students would flock to.

My child appears to be different. She is, by some distance, the absolute rockstar of her nursery. P is in the baby/toddler room, and kids in the older classes shout to her when she arrives in the morning, and are often known to corner her so they can kiss her blessed little ginger, mulleted head. I am not exaggerating in the slightest when I tell you that when I drop her off, we are often met with a chorus of small children chanting, "P's here everyone, P's is HERE!" They stand at the gate as we pass by and wave furiously at P, who ignores them completely. Peons.
Twice now I have arrived to pick her up and little girls sans underwear stand in the kid-sized bathroom, saying, "P is leaving, say goodbye to her, P is leaving!", obviously not concerned that it might be in good taste to put underwear on before bidding a baby goodbye for the day. When some of the other toddlers are dropped off by their parents, they often say, "Look Sophia/Jack/Lilly, it's your very best friend P!" The child's eyes light up, they smile and look in P's direction, but are always met with P's absolute indifference. Plastic fruit is far more entertaining than adoring children constantly falling at your feet.
So for all of the kids at P's nursery who just want a single wave or glance from the Golden Goddess herself, here you go. This one's for you: 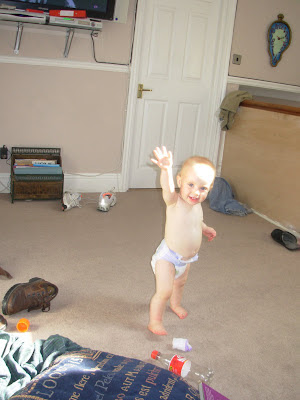 I wonder if she could teach me about this charisma and magnetism that she must ooze and I severely lack?

Maybe she can teach a charm school - I could use some of that animal magnetism as well!

Totally cracks me up that she seems indifferent to all the adulation :-)

Maybe if you ran around topless with just a swath of paper to cover your flat-ass you could catch some adoration?

She really is quite a cutie. You done good, Pru.

What DD said. Just get naked and watch the crowds form. Well, they may be forming to gape and point, but, you know. Crowds all the same.

It's always the ones that don't care about the attention that get it in spades.

Oh, what style. What grace.

Ahh, to be that cool.

Apparently, P knows her way around the masses.

So well liked at such a young age. Whatever will she have to look forward to?

Look at her! It's no wonder, really!

You are hysterical. I laughed through that whole post.