I know you're all a bunch of music haters (still no takers on my music offers except for my Cheese Wife, who is always trying to curry favour, the crazy slut), but surely some of you simply must be REM fans, past or present, right? Depressing note - it has been fifteen years since Automatic for the People was released. Fifteen bloody years. I am old as fuck.

From about 14 years old I was insistent that I needed to be different. I started to wear bellbottoms and t-shirts advocating causes - Earth Day, vegetarianism, Save the Trees, that sort of thing. We shall put aside just for a moment that I wasn't even a vegetarian, though I did dabble with pescetarianism for a couple of weeks after I met a cute vegan boy. I felt I could give up red meat and chicken, but couldn't deal with the thought of my beloved crabmeat and lobster being taken away. It was my idea of a compromise.

I made mix tapes for friends based on music I heard on 120 Minutes (R.I.P.), REM being one of the mainstays. I no doubt had to save up a few weeks' worth of babysitting money in order to afford the bright yellow, translucent cassette tape which quickly became, and remains, one of my favourite albums ever. I played the shit out of that thing, spending quite a few nights sitting in the dark listening to it and wondering why I couldn't meet a boy who was quite as clever and gifted with words as Michael Stipe.

Imagine my glee at being led to this courtesy of Jen at Fertility Now. Upon discovery, I plopped the child before the laptop, fully expecting her to possessed by the devils of dance as soon as the video started because sister loooooves to dance. Rather than being enraptured by the combination of the Muppets and a band so integral to her mother's adolescence, P ran away to play with a sock. Sigh. My heart, it was crushed. I thought about some sort of isolation torture exposure, a la locking her in a windowless room strapped to a chair with the video put on loop for hours on end, its flickering image reflected in the goggles I forced her to wear to enhance the experience. For whatever reason I picture her wearing goggles, it seems to fit the vision so much better. Not swimming goggles, but more like WWII aviation goggles: 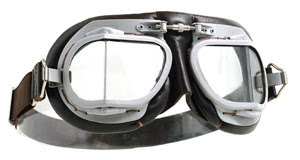 Yeah, I don't know why either.

Incidentally, if any of you do like REM and aren't too busy listening to Rod Stewart or some such, the fabulous music blog Stereogum has compiled a tribute album to celebrate this momentous occasion. It's free to download and certainly worth a casual listen.

Amen to R.E.M!
I am as old as s*** too, but Automatic is a classic no matter what age one is.
If you don't have this one, you are missing out big time!

Thanks for making me feel ancient.

Dear Kennedy,
Where are ye? In retrospect I can trace some of my early lesbian yearnings to staying up late and watching you for two hours on Friday nights. Then, I found out you were a republican and you fell out of favor with me, and my heart. Though the music will still live on.

Sophomore year in college AftP was pretty much on continuous loop in my dorm suite. "Night Swimming" was on our outgoing answering machine message, I kid you not.

However, since I am even more ancient than you, that is not technically my adolescence. I am ashamed to admit that my actual teen years featured a little too much Depeche Mode and Erasure. Shudder.

Wow, I'm older than you, too. For me, Automatic for the People = lawn seats at the REM concert in Mountain View, CA, freshman year of college. Hm, where's my cane?

High school was U2 all the way, baby.

I have a nice collection of R.E.M. cds, and still play them now and again. Most of them I bought in high school.

I skipped the boyband phase. I can't remember which were hot at the time. First New Kids on the Block, later Take That and clones.

Okay, the Indigo Girls were well represented, as well.

I love that album. Nightswimming is one of my all time favourite songs. I can't believe that album is 15 years old. I am older than old.

Teen years were a combination of New Wave (hello, Flock of Seagulls) and, of all things, Manhattan Transfer.

Oh, yeah, the Indigo Girls. One of the guys I went to college with was Amy Ray's brother, so I got to see them a bunch.

Sorry to disappoint you, but I'm not going to slut myself up to "curry your favour" this time. I'm really not an REM fan, their music bores me, and I find Michael Stipe creepy looking.

Now that I've said that, my middle school and high school music selections were bizarrely unorthodox -- I was the only teenager I knew who listened to "Sad FM, easy listening for the over 30s" just to catch Barbra Streisand tunes. And I needn't go into my obsession with Broadway musicals. Suffice it to say that I have evolved.

What was it about the Indigo Girls that was like crack to 13-24 year old women? Don't get me wrong, I was all over that like copper on a penny. It's been a while since I got my sensitive girl music on, but maybe I should. The divine Miss Sarah McLaughlin also featured pretty heavily in my CD rotation. (Yes, I did attend Lilith Faire)

"Nightswimming" is kind of the theme song that encompasses all of my hazy, golden college memories. It's a catharsis bonanza. Maybe it's just becuase there was a lot of public nudity in my 4 years at university.

I loved REM except for that one song. I hate that song! The addition of the muppets scares me.

OK got that off my chest.

Good lord, I am old old OLD. The first time I saw REM it was a free show in front of a frat house in Chapel Hill, back in the Chronic Town/Murmur era. I still consider Automatic for the People "new" REM. I mean, how can it be REM if you can understand the words?

Then there were the shows at the small local club. And too many shows in larger stadiums, when we all new they'd be playing for fun at said local club just after the finished up making all that money at the big show.

Hey, susie, all that time in Athens and you don't even mention the B-52s? Wayyy better than the Indigo Girls.

Nary an album from those three in how many years? Well, Big is dead, so that doesn't count. But still, good christ I'm old.

I LOVE it!! What a great sense of humor they have.

Funny, I have been trying to get my girls to stand since they've been home and I find myself holding their little arms up and singing, "Stand in the place where you live..." and then I switch them over.. "now face north..." Lord I am a geek!

wait, what? you're giving away music? i missed something. spending too much time being surly.

u2 baby. and peter gabriel. constantly for the three surliest and bleakest years of high school.

my first r.e.m. album was my older brother's copy of dead letter office, so i was a little later to the game, but i then loved with so great a passion that i hope i made up for it. although i also loved a whole lot of crappy stuff at the time; the first album i ever bought on my own (and by album i mean cassette) was secret separation by the fixx and my first live concert was the monkees. i should definitely never have admitted that. in my defense i have never liked pink floyd.

[wipes a tear] Nightswimming, and the boy who accompanied me the first time I ever heard that song... sigh...

Come to think of it, the adult years are much the same, with the notable additions of Better Than Ezra, Editors, Mike Doughty, and Band of Horses. I haven't evolved at all.

Well, I think we were kind of the same teenagers, so the same music framing, I imagine.
REM, Elvis Costello, Joe Jackson, the Smiths, Depeche Mode, INXS, English Beat, Police...