So here I am being all cultured and what not this morning, watching a programme on a big country house in Northern Ireland called Castle Ward. Amidst all the talk of the house's combination of Classical and Gothic architecture, there was one room which stood out to me due to the presence of this: 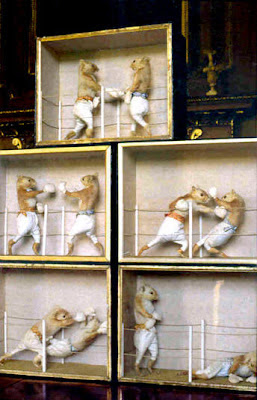 Yes, it is what you think - a sort of tableau vivant featuring taxidermied red squirrels. It's funny that they are dressed as boxers, let alone that the images are sequential.
Because I am a nerd, I wanted to find out if the Victorians made a habit of telling stories via the medium of (geniunely) stuffed animals. Perhaps unsurprisingly, they did: 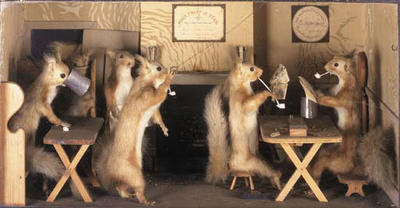 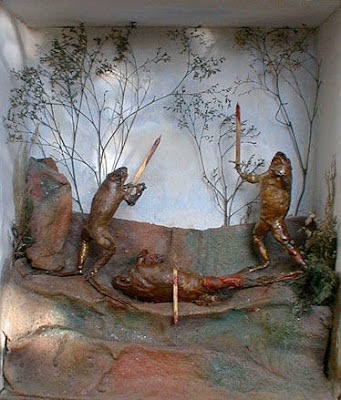 The Dude thinks I'm strange for finding things like this interesting. I can't say I want to take it up as a hobby, I just think it's fun to do some quick research. Past interests have included abandoned buildings and subway stations, the eccentricities of writers and artists (ie William Blake, Dante Gabriel Rossetti), bricked over windows and entrances, amongst other odd fascinations. My obsessive personality dictates that once an interest is triggered, that I have to Google the hell out of it until I feel reliably informed. Perhaps I'm not so far off a Brain Trust membership after all.

Does anyone else have random, perhaps strange interests? I'm not talking hobbies, just certain things that have intrigued you. Do tell.

You are not alone. I obsess about things on a regular basis - if I am intrigued by something then I have to know about it. There is a reason that they call me the Google-Queen at work.

Past interests have included Lance Armstrong (I have no real interest in cycling, but after reading Cat by Freya North I had to read Armstrong's two autobiographies), the language of flowers (I still obsess over this occasionally; I find it fascinating that flowers can MEAN something; multiple births (this is ongoing, and has been since I was very small - my little sisters are twins, so I am naturally fascinated by this phenomenon).

There are other things; if I want to know then I need to know now, but those are the ones I remember at the moment. Personally, I think taxidermic tableau are much more interesting...

I had a fascination with mormons for quite some time.

The fact that the Dude does not find these...dioramas... interesting is strange.

Troll dolls, garden gnomes, etc. and the people who collect things like that, interest me.

I am not a collecter of "stuff." I do have a few Pez dispensers, but they are all funcitoning.

They must have been overrun with squirrals to find something so "useful" to do with them.

I don't tell many about my strange and morbid interest, so consider youself honored:

Recently I found a website that is for teaching sonographers how to diagnose unusual findings in pregnancies. They include pictures and sometimes autopsy findings. This follows an earlier "research" on an artist from the 18th century who created plaster casts of complicated pregnancies (fetal placements/birth presentations). Many of his works have been preserved.

Oh my god, I am the queen of being obsessed with weird stuff. You and I have discussed our mutual interest in old cemeteries. I've also, at one time or another, done loads of Google "research" on famous haunted houses, cat food, musicals, perfumes, name etymologies, and any of the various celebrity men that I've become smitten with -- Clive Owen, James D'Arcy, James Gandolfini, Stephen Merchant, etc. And, like Seepi, I've learned quite a bit about cults as well.

I think I'm just one of those people who likes to be an expert. Plus I'm very strange.

Don't know. I can't remember any obsessions, before the one on IF. :-/

One of the most disturbing tableux of that time period is a kitten tea-party. :P

I tend to Google things on a whim. If someone uses a word I don't know or if I find myself about ready to talk out of my ass about something I really don't understand, I'll go straight to the mighty wikipedia, repository of all of the information you'll ever need to win a game of Trivial Pursuit.

Grocery stores. I like to go into "other" grocery stores and see what's different from "my" grocery store. My one giant regret about my trip to the UK was that I didn't get to run around a Tesco. I had to make do with the food halls at Harrod's.

Oh wait, one more - I love to find out about the history of prisons and mental hospitals, but there is a surprising dearth of literature out there. Guess I should write a book.

Wow, I find that incredibly odd, but strangly fascinating. I might need to do some more research...

The taxidermy is amazing. I love things victorian- there is so much to learn. Back in the days when I had time, I researched architecture, folklore, regional cooking. No more. It's all about the nursing these days~

I am strangely fascinated with a local oddity near me... the Winchester Mystery House. If you like bricked over windows, stairs that lead straight up into the ceiling, and second story doors that open to open space (no balcony) it's totally worth a gander!